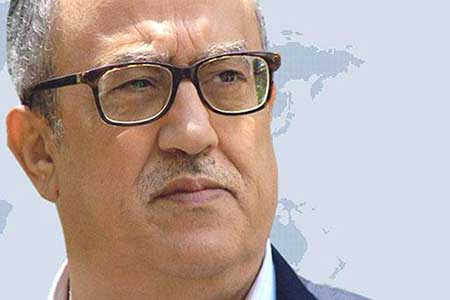 A Jordanian journalist, intellectual and political activist born in Amman 1/4/1960.

Hattar was imprisoned and sent to court several times because of his writings and political activities, the first was in the summer of 1978 and then in the spring of 1979 for participating in student and youth activities. He was forbidden to work or travel until 1989. He was imprisoned again in 1996 for supporting the uprising in the south of Jordan due to rising prices and difficult living situations.

He was subject to an assassination attempt in 1998, which caused him serious injuries requiring a number of surgical procedures. Hattar continued his dissenting political and intellectual activism, prompting the authorities in Jordan to forbid him from writing in the local press from 2008 until the day of his assassination.

Hattar has several intellectual contributions to the criticism of political Islam, national thought and the Arab Marxist experience. Nahed Hattar is considered the theorist of Jordanian national identity and a pioneer of Jordanian national movement. In his studies, books and essays he presented an analysis of the social, cultural and political structure of Jordanian society. Hattar defended Jordan against the Zionist project, embodied by the notion of ` the alternative homeland` and the liquidation of the Palestinian issue at the expense of Jordan and Palestine alike. He stood against the liberal policies and the comprador who sought to destroy the state institutions and the middle class. He also worked towards renewing the narratives of the national and social liberation movement, and rediscovering the centrality of the nation state and the notions of development, counter-democracy, eastern culture and resistance against colonialist projects and their religious extremist apparatuses in the region, especially in Syria.